Jewellery and gemstones were important in medieval times because they were not merely adornments, they held strong associations with both secular status and religion. During this period, only wealthy aristocrats were able to buy and wear jewellery. On special occasions, everyone down from the kings and queens, through the aristocracy to the knights would wear their medieval jewellery to proclaim their social standing. Additionally, knights believed that particular gems had the power to preserve and protect them in battle, both from their human enemies and also from malignant spirits. Also popular were evil eye jewelry to ward off evil spirits.

A great deal of mediaeval jewelry was fashioned by monks in the monasteries, who were also skilled craftsmen. Much of this medieval jewelry was used within the church itself. The jewellery worn in the mediaeval period in Europe reflected the obsession with hierarchy and status. Members of the various royal families and the aristocracy wore gold jewellery, wedding rings, silver jewelry, engagement rings, and precious stones, while lower social classes who nevertheless had some standing in their communities wore jewellery fashioned from base metals such as pewter and copper. 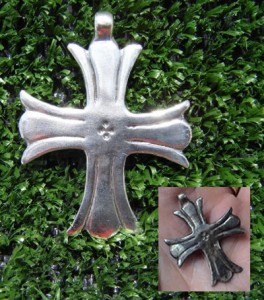 Until the late 14th century, precious stones were polished, rather than cut and faceted. A large, shiny stone proclaimed the wealth and status of its owner. Some precious stones from the period contain inscriptions or magic symbols which were believed to protect the wearer. Goldsmiths would use enamelling to add colour and decoration to their pieces. This was achieved by firing ground glass at very high temperatures onto the surface of the metal, and the goldsmiths developed a number of spectacular effects which are still admired and prized today, and have never been improved upon. All jewellery was highly prized in medieval times, but fashions changed in precious stones. Until the late 13th century, the sapphire was the most prized gemstone, then the ruby rose to prominence. By the late Middle Ages, the diamond was the gemstone the richest people aspired to, and this was reflected in the cost of the stones. Medieval jewelry was expensive, because the raw materials which reflected the status of the owners were very costly. There was also an element of supply and demand driving the price of the jewellery. As fashions in gemstones changed and demand became higher, the prices of the stones increased. However, the status-obsessed people of the era were happy to pay the prices demanded.

In the 15th and 16th centuries, medieval jewelry transitioned from sacred and symbolic to more innovative and fashionable and mens rings were highly popular. Whereas jewelry of the Middle Ages was influenced by religion, Renaissance pieces were progressively inspired by real-life and nature, counterbalanced by the discovery of the New World. The Renaissance announced a new era- and medieval jewellery was permitted to be worn for beauty and fashion. The conquest of Peru and Mexico likewise effectuated an abundance of gold and silver and pioneered new possibilities and markets for jewelry. The Renaissance is frequently referred to as “the jewel age”.

During this period the royal jewels became of growing importance and economic value. King Henry VIII had a huge accumulation of gems and stones, with a personal collection of two hundred and thirty-four diamond rings and three hundred and twenty-four brooches. A great deal of the medieval jewelry in the Renaissance was misplaced due to the Thirty Years War throughout Europe. One of the touching changes from the Renaissance into the 17th century was that jewelry became a conventional decorative accoutrement that was also donned by peasants.

Jewelry in the 17th and 18th Centuries

In the 18th century, a.k.a. the age of gems, jewellers were in high demand, very much so, that two kinds of jewellers evolved: the bijouterie (who crafted gold and enamel and the joaillerie (who mounted diamonds and precious gemstones). In the 1880’s, man-made gems began appearing on the marketplace. Imitation jewelry became a booming trade finally becoming a legalised industry. Jewellers could replicate the trends worn by the most stylish members of high society, making it an acquirable fashion item for all.